Sign Up Now
You are here: Home / Themes Retired / Magazine by StudioPress 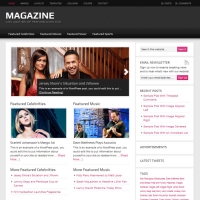 The Magazine theme from StudioPress is consistently among the firm’s best-selling themes, due in large part to its flexible home page and solid support for widgets. It shares many features with the StudioPress News theme.

In October 2013, StudioPress released Magazine Pro, an HTML5, mobile responsive update to the Magazine theme. If you’re looking to update your Magazine-based site or launch a site with Magazine, be sure to check out Magazine Pro.

First released on 7/13/10 and updated on 9/6/11, Magazine is a 2 or 3 column theme with 6 layout options, a landing page template, 7 color styles, and a widgetized home page. Beyond the WordPress standards of custom menus and threaded comments, Magazine also supports custom headers, custom backgrounds, and Google web fonts (specifically, Play). The selected font adds about 14 Kb to the site’s page weight, which is a very modest addition for typography.

The Magazine theme has a total of 12 widget areas, 3 of which are footer widgets that divide the page into equal parts. It also supports an “after post” ad widget, which can be used to add any widget at the end of a post, as well as an “after content” ad widget, which displays just above the footer on all pages, including the home page.

All of the supported widget areas for the Magazine theme are shown below: